The purpose of this project for the National Zoo’s Smithsonian Biological Conservation Institute (SBCI) in Front Royal, Virginia was to provide a safe environment for the endangered whooping crane. There are less than 900 of the birds on the planet and the objective is to breed and help create a self-sustaining population. Hercules partnered with Kee Construction from Winchester, Virginia to construct five 50’ x 150’ rectangular enclosures that effectively prevent escape as well as invasion by predators. The five enclosures were each divided into 3 pens of 50’ x 50’ and double gates were necessary throughout to allow the keepers to pass between the pens. Door type hinges were used so that gaps between frame and posts were as small as possible to prevent young cranes from escaping. Materials used include 12 foot high chain link fence with a dig barrier to prevent intruders. Overhead netting prevents the birds from flying away; this is supported by four ½” steel cables run from the corner posts attached with eye bolts to a 16’ high center post in each pen. Corrugated plastic pipe was installed to cover the top rail to protect the net. To improve stabilization of the entire structure, overhead bracing was added across aisleways and ½” steel cables were attached on the outside perimeter and affixed to helical screws which were embedded in concrete. Additionally, wire insulators were installed on the exterior fence so that charged wired could be used for further prevent intrusion. Outside of Hercules’ scope was the addition of small ponds and the plumbing necessary to maintain fresh water in the features. This project is valued at $400k+ and completion took approximately 8 weeks. 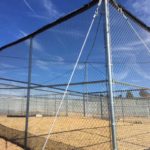 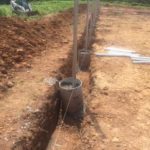 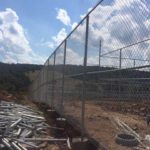 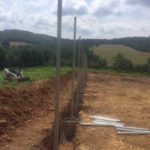 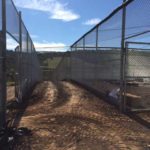 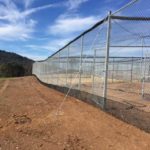 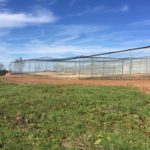 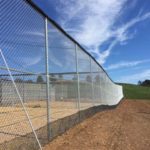